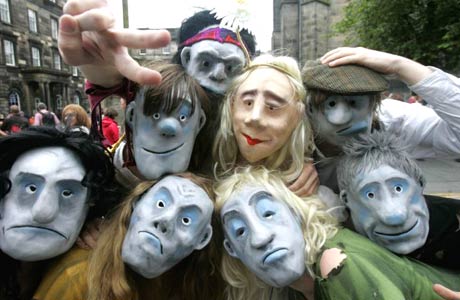 Britons rejoice! Last Friday 6th August the Edinburgh Fringe Festival kicked off for the umpteenth time – sparking scenes of wild celebration across the UK. As all the nation’s most insufferable, preening, self-obsessed performer-brats occupy their next three weeks in the Scottish capital by wobbling around on tartan stilts and exposing their genitalia with little to no artistic justification, we ordinary folk elsewhere on this great island of ours can finally enjoy some quality, tosspot-free time. Rejoice!

Or rather, stop it. Stop it now. I’m looking at you, the ‘quality papers’ – because I’ve had quite enough of your Fringe bashing. I accept that the world’s largest arts festival has its flaws – there are undoubtedly too many fresh-faced Etonians attempting ill-informed political comedy, and Christ couldn’t we all do without the performance poetry – but the endless media piss-shower is really starting to grate.

I feel for the critics, I do. I understand that the festival has been going on for decades and that there are only so many times you can bite your lip when met with a post-modern re-imagining of Upstairs Downstairs – but what was once quite possibly a ‘refreshingly negative’ take on the Fringe has become as tired and old hat as a refreshingly negative take on Nazism. More than that though, these kinds of reviews simply miss the point. The beauty of the Edinburgh Fringe Festival is that it is open to everyone, so while there will inevitably be productions of soul-destroying monotony and misplaced self-satisfaction, visitors are also guaranteed to find more theatrical and comedic gems than any critic can shake a shitty stick at.

My first foray into the Fringe was as a playwright three years ago and, having been back every year since, I’ve come to realise that taking the bad with the good is key to making the most of the festival experience. After all, if anything can help you appreciate a great play, it’s watching a bad one. On my first visit in 2007 I spent a whole ninety minutes being subjected to a middle-aged woman’s account of her recent sexual liberation, and by the end I had come to two conclusions: that I now know far more than necessary about the menopause, and that the play I’d seen earlier in the day was marvellous.

And that is the key. For all its inane student Shakespeare recitations, dignity-shredding Royal Mile tomfoolery and scripted feminist rants on knocker size, the Edinburgh Fringe Festival offers endless new and original theatre, comedy, dance, music and art. Let’s not forget that this is the festival which launched the careers of writers, actors and comedians like Tom Stoppard, John Cleese, Tom Courtenay and Steven Fry, and will undoubtedly play a role in propelling Britain’s brightest stars to fame for years to come. It is a festival that gives a platform to everyone from the preening narcissists to the performers of genuine talent and drive, and it is to be enjoyed as much for the deep dark lows as for the giddy bright heights.

So I say to you critics, one and all, that enough is enough. Leave the festival alone to do what it’s been doing for seven long decades; delivering equal parts dog shit and ambrosia into the public’s gaping cake-hole.

3 thoughts on “An End to Fringe Bashing”