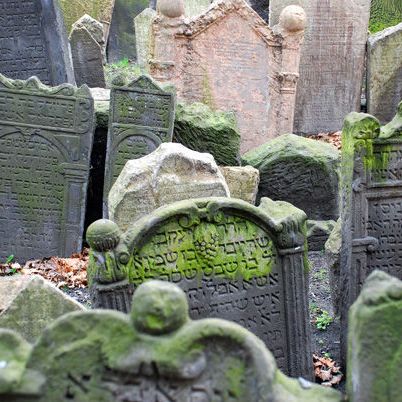 ————————————————————————————————–
The Old Jewish Cemetery in Prague is, rather predictably, a cemetery for old Jews: specifically, those who snuffed it between 1439 and 1787. During this time the Jewish community was kettled into a tiny ghetto, having to stuff their stiffs into a 60-metre-square graveyard, and so over three centuries it was crammed with around 100,000 bodies. Which explains why it has Europe’s highest concentration of tombstones.

FUN FACT!!! Prague’s famous cemetery only survived Nazi occupation because Hitler wanted to preserve it as ‘a museum to an extinct race’.