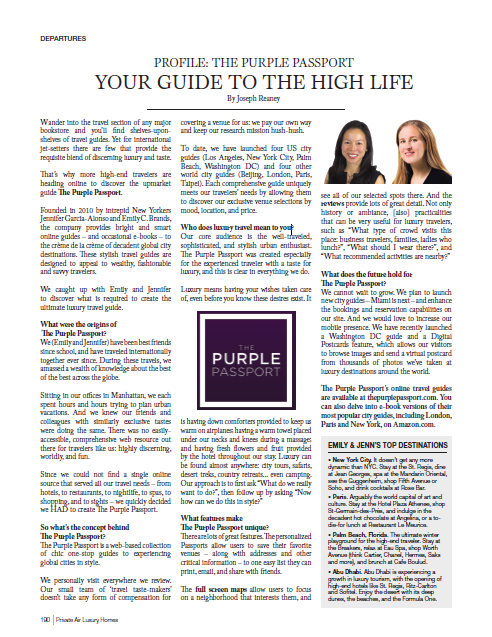 I’m pleased to reveal that my first magazine article of 2014 has now been published.

It’s a profile piece on The Purple Passport for Private Air Magazine.

I interviewed the founders of TPP, Jennifer Garcia-Alonso and Emily C. Brands, to find out what makes these ultra-stylish, luxury travel guides different from all of the others.

You can find out what they had to say in this extract from the latest issue of PA.

As well as this article, my World Words writers contiributed several more pieces for the January-February issue of Private Air Magazine. You can read them all on the WW site. 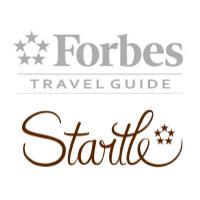 Often called “London’s most famous hotel,” The Savoy holds a special place in the heart of this great European city. Opened in 1889 as the first truly high-end hotel in Britain, The Savoy has been at the forefront of decadence ever since, having introduced a series of mod cons ranging from electric lighting to hot running water, en suite bathrooms to air-conditioning. Today, the hotel retains its ability to keep pace with modern luxury (every room boasts MP3 players and flat-screen TVs) while retaining the old-fashioned prestige and opulence that has seen figures ranging from Winston Churchill to Frank Sinatra pass through its famous revolving doors. The Savoy has been one of the world’s finest hotels for more than 120 years, and it’s a position it will maintain for many more years to come.

So says the introduction to my brand new Q&A piece on London’s Savoy hotel for Forbes Travel Guide/Startle.com. You will also find everything you need to know about its rooms, restaurants, location and unusual design aesthetic.

You can read the entire thing here. And later, keep a beady eye out for my hotel guides to other London giants including the Mandarin Oriental Hyde Park (and its lovely spa), The Goring and The Dorchester… coming soon. 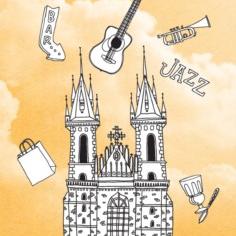 Good news! After putting it off for a disproportionately long time, I have finally, finally, uploaded all the travel guides I have completed in the last year to this very website.

Since the beginning of 2011 I have written dozens of guides, itineraries and reviews on everywhere from Cardiff to Cancun – with particular focus on my joint residences of the UK and the Czech Republic – and they are now available for everyone to see!

As it’s been an unforgivably long time since my last post, I thought I’d take a couple of minutes to point you in the direction of the thing that’s been keeping me so goshdarn busy… the incomparable GuidePal city guide to Florence. That’s right – I did a guide.

As the world’s leading smart phone travel guide application, this is officially the best free downloadable guide to Florence out there. Probably. So if you’re lucky enough to be heading to this cultural capital, why not take my wise words along for company?

Incidentally, if you’re heading to Prague or Edinburgh, I wrote those city guides too…